Supreme Court drops the HAMMER on CNN! - The Horn News 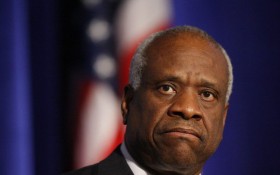 Tuesday, the conservative judge drafted a memo requesting that the First Amendment be reconsidered carefully. He addressed the infamous New York Times v. Sullivan, a case ruling that made it virtually impossible for the press to be sued by public figures for libel and biased “fake news.”

Thomas wrote that he thought previous Supreme Court rulings on the First Amendment became about politics… and wrongly so.

“We should not continue to reflexively apply this policy-driven approach to the Constitution,” he said.

Liberal journalists, broadcast groups and other media pundits seemed stunned by Thomas’ move. They rushed to accuse Thomas of stoking a war on the press.

In his statement, Justice Thomas griped about the fact that “public figures are barred from recovering damages for defamation unless they can show that the statement at issue was made with ‘actual malice’ – that is, with knowledge that it was false or reckless disregard of whether it was false or not.”

The conservative judge’s opinion comes at a tender time in politics. Liberal pundits, for example, claim he’s opening a can of worms for the next conservative judge, should he retire under Trump’s administration.

Meanwhile, Trump has leveled his fair share of criticisms of mainstream media and their bias.

Just this week he tweeted —

THE RIGGED AND CORRUPT MEDIA IS THE ENEMY OF THE PEOPLE!

An onslaught of attacks has been hurled at the president from media goliaths such as The Washington Post has been stunning. Approximately 90 percent of all mainstream media coverage of the president has been negative, according to a recent study. Everything from Trump’s weight to his mental health has been challenged, scrutinized, assessed on a nightly basis.

“They’re saying what a lot of people are thinking,” Brzezinski said, on the discussion of relations with North Korea. “The president is mentally ill.”

“You think about the missions we have in places like Niger and there is no way President Trump has the intellectual capacity to even understand what we are doing. Which I think brings the possibility of war even closer to the forefront. I think we’re in a very dangerous place. I think the president is a very dangerous man because of his lackings.”

A guest on that same show later claimed the president should be on suicide watch.

Of course, none of it is true. Critics say it’s libelous to spread these unfounded rumors — but Trump can’t take actions thanks to the 1967 court ruling.

That is, unless Thomas has his way and the Supreme Court revisits the landmark ruling.

The idea has anti-Trump liberals freaking out. And with good reason.

Liberal lawmakers depend on the media’s unfair, biased, and unfounded attacks on conservative lawmakers.

They know it’s been way too easy for mainstream outlets to verbally abuse the the president without accountability.

But Justice Thomas could finally change all of this — and that should make Democrats very nervous.