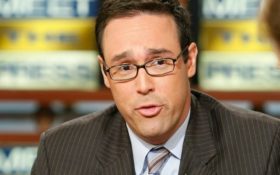 Looks like it’s not just conservatives who are fed up with the “fake news” over at CNN.

The rest of the mainstream media is also getting sick of the network’s shenanigans!

In the latest in a string of major humiliations, one of CNN’s big-name political reporters was busted literally making-up a story out of thin air… and he was called out publicly by a reporter for another mainstream outlet.

Chris Cillizza joined CNN earlier this year from The Washington Post, where he made a name for himself with a daily report called “The Fix.”

Well, he’s no longer writing “The Fix” … but maybe he should keep the name.

Because when it comes to his reporting, “the fix” is in.

Cillizza used a New York Magazine profile to claim that Joe Scarborough – the MSNBC cohost and former Republican congressman from Florida – will run for president against Donald Trump in 2020;

“Don’t look now but Joe Scarborough is starting to look like a presidential candidate,” he wrote, with a link to the magazine’s cover story by Olivia Nuzzi.

Don't look now but Joe Scarborough is starting to look like a presidential candidatehttps://t.co/kg65Ez6Jng pic.twitter.com/itMVfPX8Io

Just one problem: the Nuzzi herself called bull on Cillizza

“As the author of the story, let me just say: no, he isn’t,” she fired back on Twitter for all the world to see.

As the author of the story, let me just say: no, he isn't. https://t.co/GJtNUGb2fY

But like too many CNN personalities… and too many left-wing mainstream reporters in general… Cillizza wouldn’t let the facts get in the way of his story.

He concocted an entire narrative about Scarborough’s supposed 2020 campaign, and hung it all on Nuzzi’s story even though she publicly stated no such thing and even REJECTED his lame claim.

But Cillizza used the flimsiest old excuse in the book favored by desperate reporters looking to make stuff up.

“Scarborough is not only not denying he is interested in running for president but also positioning himself in such a way to appeal to people disgruntled with Trump and with politics more broadly,” Cillizza wrote. “Which is interesting — and smart.”

It’s the old “he didn’t deny it, so it must be a possibility” trick.

By that standard, it looks like Scarborough could be running for president of the moon, too.

After all, he didn’t deny it!

The reality is, Scarborough is about as serious a candidate for president in 2020 as Spider-Man.

It’s just not going to happen.

He hosts a show on liberal MSNBC, but no liberals would ever vote for him. And he recently – and very publicly – quit the Republican Party, burning his bridges with the base there (and, not to mention, the GOP already has someone running for president in 2020 by the name of Donald Trump).

So even if he never “denied” it, the odds of him running are small and the chance of such a campaign getting off the ground are smaller still.

But Cillizza was desperate for a story and out for attention. Looks like he got it… but it’s the kind of negative attention CNN can’t afford right now.

The once-proud network is already reeling after a series of major embarrassments – including a scandal that involved a full retraction of a story about Anthony Scaramucci that led to THREE resignations.

Looks like they haven’t cleaned the house completely yet.

And until they do, the network will continue its collapse into irrelevance.