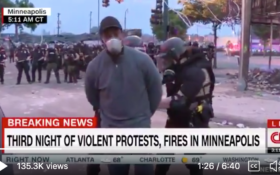 The madness in Minneapolis rages on.

The ongoing riot has seen stores looted, establishments vandalized and a police precinct engulfed by flames all captured on camera.

And in the wee hours of Friday morning, it was a CNN anchor and camera crew who were arrested.

The Minnesota State Patrol arrested a CNN television crew as they reported on violent protests in Minneapolis following the death of George Floyd, a handcuffed black man who pleaded for air as a white police officer kneeled on his neck.

You can take a look at the video of the arrest for yourself below:

A CNN crew was arrested while giving a live television report in Minneapolis, where the crew was covering ongoing protests over the death of George Floyd. They had clearly identified themselves as press. https://t.co/QklqlJm7mD pic.twitter.com/0xreuTPuWS

While live on air, Jimenez was handcuffed and led away. A producer and a photojournalist for CNN were also led away in handcuffs.

CNN’s communications team earlier said on Twitter that the crew was arrested “for doing their jobs, despite identifying themselves — a clear violation of their First Amendment rights.”

The Minnesota State Patrol said on Twitter that the journalists were among four people arrested as troopers were “clearing the streets and restoring order.” The patrol said they “were released once they were confirmed to be members of the media.”

Late Thursday in Minneapolis, cheering protesters torched a police station that the department abandoned as three days of violent protests spread to nearby St. Paul and angry demonstrations flared across the U.S.