CNN analyst CALLED OUT for lies... by her own producer!? - The Horn News 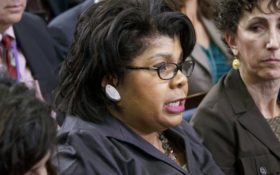 CNN political analyst April Ryan was called out on Tuesday for her “fake news” reporting that President Donald Trump was “heckled and booed” on the South Lawn of the White House.

A Tuesday event at the White House was originally scheduled to celebrate the NFL champion Philadelphia Eagles, but instead was turned into a patriotic event to celebrate America. Trump cancelled the team’s invitation over anthem kneeling on Monday.

Ryan told followers that she had confirmed Trump was being booed by an angry crowd when he arrived at the event — but to her surprise, CNN Producer Noah Gray quickly fact checked the lying political analyst. Ryan deleted her tweet — but not before critics took a screenshot.

“Breaking: Reporters on the south Lawn have confirmed the @realDonaldTrump was heckled and booed when he came out to celebrate America,” Ryan tweeted on Tuesday.

Gray quickly called out Ryan, tweeting that her reporting was fake news.

This is not true. There was a protester who shouted at Trump and was booed. https://t.co/6zOSCifHFi

A CNN analyst takes one liberal protestor and turns it into a “confirmed report” about an angry, booing anti-Trump mob.

Is there any more clear example of the mainstream media’s unfair bias than this?

Here’s video of the one man that was shouting at Trump and later escorted out of the event.

After being called a cowboys fan after shouting @ POTUS, protestor shouted “let’s hear it for the Eagles!” pic.twitter.com/KtEwAhOj6I

Three hours after her initial claim, Ryan backtracked that Trump was booed.

“Breaking: reporters are rewatching the event and found a heckler in the crowd started asking questions of @realDonaldTrump and the heckler was booed. The heckler was escorted out of the event. The booes were for the heckler,” Ryan tweeted.

Breaking: reporters are rewatching the event and found a heckler in the crowd started asking questions of @realDonaldTrump and the heckler was booed. The heckler was escorted out of the event. The booes were for the heckler

After correcting herself, Ryan tried to delete her “fake news” tweet. But that was not enough to stop Twitter users for calling out the analyst for spreading lies —

You said you “confirmed” it. All of your confirmations are fair to second guess. Hope it was worth it :—

So basically, you tweeted out a lie, intimated that it was breaking news, and…oops?

Your original tweet contained the language "confirmed by reporters."Granted, these days that's not saying much. Still, it was not confirmed, it was just another one of @CNN's #FakeNews lies. Glad you deleted the original, FINALLY. I hope your WH press credentials are revoked.

WHOLEHEARTEDLY AGREE – press credentials should be stripped for @AprilDRyan ‘s blatant lies & hatred for our @POTUS ! Not to mention how she treats @PressSec ! How can we get this to happen?

The credibility of the media continues to plummet as analysts like Ryan spread “fake news.”

Do you think she deserves to be stripped of her press credentials?

Do you think April Ryan should be stripped of her media credentials?