CMT Music Awards will add a shocking twist this year... - The Horn News 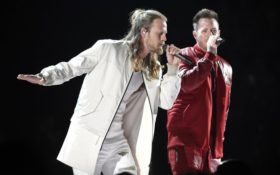 Carrie Underwood, Florida Georgia Line and Jason Aldean are the leading nominees for the CMT Music Awards with four each, but it’s the pop artists who might steal the big prize at this year’s awards show.

CMT announced Tuesday that for the first time, pop artists who have collaborated with country artists are nominated for video of the year. Justin Timberlake’s “Say Something” featuring Chris Stapleton and the country chart-topping song “Meant To Be,” by Bebe Rexha featuring Florida Georgia Line are both nominated in the category, alongside artists like Blake Shelton, Kelsea Ballerini, Brothers Osborne and Thomas Rhett.

Although non-country acts have often been nominated in other categories, such as collaborative video or CMT performance of the year, the top award has been reserved for country artists.

A dozen songs are nominated for the video of the year, which include Underwood’s duet with rapper Ludacris, “The Champion,” Aldean’s chart-topper “You Make It Easy,” and Kane Brown and Lauren Alaina’s duet “What Ifs.”

Grammy-winning group Little Big Town are taking over the helm as hosts for the first time when the show premieres on June 6 at 8 p.m. Eastern/Pacific on CMT.

“The CMT Awards is such a special night and always has the most insane collaborations and performances,” the band said in a statement. “We look forward to it all year long. We are excited and honored not just to be nominees, but to also host the show and keep the party going.”

Fan voting starts Tuesday at CMT.com. The final five nominees in the video of the year category will be announced on the morning of the show.