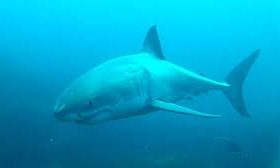 It’s not officially Shark Week but for trackers along the East Coast, several great white sharks are putting on a show.

The Charlotte Observer reports nine sharks tagged by the ocean data-gathering organization OCEARCH have appeared near the coast in a five-day span, including two that are about 12 feet (3.66 meters) long.

Tracking shows two sharks near Charleston, South Carolina. Five more are near the Outer Banks. It’s unclear why so many sharks are swimming near shore in the same region, but OCEARCH’s Chris Fischer told The Outer Banks Voice that the area is a key spot in the shark’s migration.