Clinton to testify before Benghazi panel on Oct. 22 - The Horn News 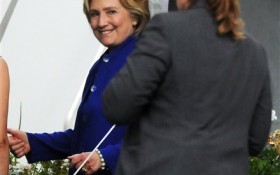 WASHINGTON (AP) — The House committee investigating the 2012 attacks in Benghazi, Libya, says Hillary Rodham Clinton has agreed to appear before the panel on Oct. 22.

Committee spokesman Jamal Ware says Clinton will be questioned about the attacks as well as the unusual email arrangement she used when she was secretary of state.

Clinton’s campaign and House Republicans have sparred for months over her possible testimony and her refusal to turn over the private email server she used.

House Speaker John Boehner said earlier this week that Clinton should “come clean” and turn the server over to the State Department’s inspector general.

The committee is investigating the deaths of the U.S. ambassador and three other Americans in the Sept. 11, 2012, attacks on the diplomatic facility in Benghazi.