Clinton to surrender e-mail server: Is her campaign doomed? - The Horn News 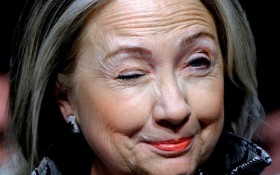 While the e-mail scandal could mean serious legal trouble for Hillary Clinton, she’s probably not facing potential jail time. But the damage may already be done, and voters may be moving to end her campaign soon. While Clinton’s e-mail scandal heats up, her presidential campaign is rapidly cooling.

A new Franklin Pierce University/Boston Herald poll released today has her losing the New Hampshire primary to socialist Bernie Sanders by near double-digits, 44-37.

Don’t slam the cell door quite yet; the Clintons are notorious for both getting into legal trouble, and then finding ways to weasel out.

But the American public is harder to fool, and are sending a message to Clinton.

Clinton’s surrendering of the servers, the new revelations it brings about classified information, and the subsequent voter backlash all point to her dirty dealings as secretary of state.

The Associated Press is reporting a Republican lawmaker told them two emails that traversed Clinton’s personal system were subsequently given one of the government’s highest classification ratings.

Federal investigators are looking into the security of Clintons’ email setup amid concerns from the inspector general for the intelligence community that classified information may have passed through the system. There is no evidence she used encryption to prevent prying eyes from accessing the emails or her personal server.

Republican National Committee Chairman Reince Priebus said: “She knows she did something wrong and has run out of ways to cover it up.”

Republican Sen. Chuck Grassley of Iowa said two emails that traversed Clinton’s personal system were deemed “Top Secret, Sensitive Compartmented Information” — a rating that is among the government’s highest classifications. Grassley said the inspector general of the nation’s intelligence community had reported the new details about the higher classification to Congress on Tuesday.

Those two emails were among four that had previously been determined by the inspector general of the intelligence community to have been classified at the time they were sent.

The inspector general for the intelligence community had told Congress that potentially hundreds of classified emails are among the cache that Clinton provided to the State Department.

While voter punishment may feel hollow compared to criminal charges, at least that form of justice comes much swifter than the legal system can possibly muster.