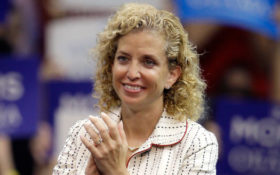 And it’s so outrageous, she might as well spit in the face of American voters… because it directly contradicts what officials have said this week while under oath.

Sponsored: “Big Tobacco Must Pay” – and YOU Could Cash In!

All 17 intelligence agencies have agreed Russia was behind the hack of Democratic email systems — but Wassernman Schultz doesn’t want the world to know that.

That’s because the hack happened while she was the DNC chairwoman. So she’s claiming the FBI never contacted her office… a total contradiction to what former President Barack Obama insiders have said under oath.

“At no point during my tenure at the DNC did anyone from the FBI or any other government agency contact or communicate with me about Russian intrusion on the DNC network. It is astounding to me that the chair of an organization like the DNC was never contacted by the FBI or any other agency concerned about these intrusions,” Wasserman Schultz told the media in a prepared statement.

“As a member of Congress, I had the unique clearance to hear any classified briefing that would be involved in such an intrusion, and the FBI clearly should have come to me with that information. They did not.”

But that’s a total lie, according to former Homeland Security Secretary Jeh Johnson, an Obama insider.

Johnson told the House intelligence committee while under oath that in the late summer and into the fall, he was very concerned about the meddling in state election systems and that multiple intelligence agencies contacted the DNC, including the FBI.

He said he was frustrated DHS learned of the hack into the DNC late in the game and that Wasserman Schultz-run committee refused help because it was instead using a private cyber security firm.

“My interest in helping them was definitely of nonpartisan interest, and I recall very clearly that I was not pleased that we were not in there helping them patch this vulnerability,” Johnson said said. “In retrospect, it would be easy for me to say that I should have bought a sleeping bag and camped out in front of the DNC in late summer.”

President Donald Trump said Thursday that Johnson’s statement makes him the “latest top intelligence official to state there was no grand scheme between Trump & Russia.” Johnson admitted while under oath that he wasn’t aware of efforts by Trump or his campaign to collude with Russia beyond what the intelligence community already knows.

Should Debbie Wasserman Schultz be allowed to get away with this?