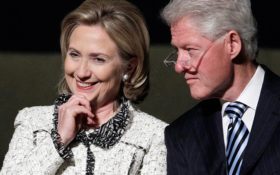 Former President Bill Clinton and his wife, Hillary, campaigned for her to beat the Republican Senate leader – but a close Clinton crony just got busted breaking federal law… and it all happened while she was the state’s top election official!

When Alison Lundergan Grimes ran for U.S. Senate in 2014, left-wingers around the country wanted her to embarrass Republican Senate Majority Mitch McConnell. It turns out, a few of them wanted to help a little too much – and one of them had been a Clinton pal for decades.

A federal grand jury indicted Grimes’ father, Jerry Lundergan, and another man for illegally smuggling almost $200,000 of corporate donations into her Senate campaign – and then standing by while Grimes’ campaign lied to the government about the whole thing.

Jerry is a longtime, close friend of Bill and Hillary even after he got convicted for fixing a state contract back in the ‘80s.

Being a crook never hurt anyone’s relationship with the Clintons. He – and his daughter – remain tight with the former first family.

But he is now facing 10 counts in federal court, including “conspiracy,” falsification of records, and “causing the submission of false statements to the Federal Election Commission (FEC).”

It turns out that Lundergan wanted his daughter to win so much that he paid for political consultants and other campaign services – but he told them to illegally bill a business that he owned, S.R. Holding Company Inc., instead of his little girl’s campaign.

That kept his corporate donations off the books.

All said, Grimes’ Senate campaign received $194,270.39 in illicit, secret contributions from her dad and his buddy, Dale Emmons.

Remember how Democrats always say they want to get corporations out of campaign financing? What a lie!

“It is outright illegal to use any corporate resources to fund a federal campaign,” said a spokesman for Public Citizen, a left-wing group that backs campaign finance laws.

Grimes said she had no idea about her father’s ruse, and that her campaign filed false statements as a mistake.

But do you really believe this is the first time the two have cheated on an election? The Lexington Herald-Leader calls the two men “longtime Democratic operatives,” and Lundergan even ran the Kentucky Democratic Party for years.

What’s more, all this happened when Grimes was Kentucky’s Secretary of State, the official who’s supposed to make sure election laws are followed.

Who better to cover everything up?

“At the same time that she was serving as Kentucky’s… chief elections officer, Alison Lundergan Grimes ran a US Senate campaign that now stands accused of the most egregious campaign finance crime in the history of the Commonwealth,” said Republican Party of Kentucky Communications Director Tres Watson.

“It is clear Secretary Grimes has absolutely no regard for the laws governing our elections that she was elected to uphold,” the GOP added.

But as incredible as it sounds, Grimes still serves as secretary of state!

Grimes denies everything and even tried to play the victim of a big, bad Republican conspiracy.

“These allegations started as a result of a politically motivated complaint filed against my campaign nearly five years ago,” she said in a statement.

Grimes took a page out of crooked Hillary’s book by saying the complaint was “already investigated and completely dismissed by the bipartisan Federal Election Commission.”

But that was a different crime Grimes stood accused of committing. That time, Republicans accused Grimes breaking federal election laws by funneling campaign contributions to daddy’s business partners. This is the other way around – and yet another time authorities say her family has been caught acting like they’re above the very law they’re supposed to enforce.

Grimes pulled out all the stops to win in 2014, and she has good company in her snobby, holier-than-thou attitude. She called the Clintons to stump for her, and billionaire George Soros gave her $4,600. At least 13 other billionaire donors backed her.

Grimes also attended the April 2014 meeting of the Democracy Alliance, a super-secretive group founded by Soros and other ultra-rich liberals who plot to turn America into a socialist country.

But everything she did couldn’t save her from a humiliating defeat. Politico reported that McConnell “trounced” Grimes – and Grimes had to report her own landslide loss.

Now, even though her campaign is in the middle of 16 criminal charges, Grimes is still overseeing the state’s elections.

If a crime like this can happen in a red state like Kentucky, imagine the lawbreaking that’s taking at ballot boxes in Democrat strongholds like Detroit, Baltimore, and L.A.

Kentucky to needs to lock Lundergan up and throw away the key – unless prosecutors make a plea bargain for him to testify against crooked Hillary.