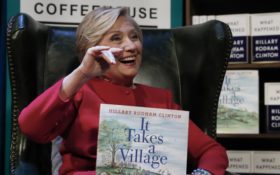 Hillary Clinton’s former director of communications has her own story to tell.

Jennifer Palmieri is working on a “book of lessons” for future women leaders, Grand Central Publishing told The Associated Press on Wednesday. The book is called “Dear Madam President,” an “open letter” drawing upon Palmieri’s experience in politics, including her time with Clinton’s 2016 presidential campaign and her years as communications director during the Obama administration.

“‘Dear Madam President’ empowers and emboldens women to reach for the top rung in any situation, using informative insider stories and invaluable takeaways from years of working at the highest levels of power,” according to the publisher. “As she makes clear in this book, Palmieri believes Clinton’s candidacy revealed how, despite all the gains women have made, we still struggle to envision a woman as president. She argues in the book that Clinton’s example served to blaze a trail that will help us all reimagine women in leadership roles.”

Palmieri said in a statement that she wanted to “provide all women with advice and lessons learned the hard way to help them lead in their communities, flourish in the workplace, and literally run the world.”