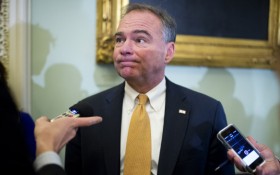 Sen. Tim Kaine of Virginia says he and his wife have tested positive after taking coronavirus antibody tests.

Kaine said in a statement Thursday that he and his wife, Anne Holton, were tested for antibodies this month after their health providers thought it possible they’d had mild cases of virus earlier this year. Kaine said he initially thought he was suffering from remnants of an earlier bout with the flu and a high pollen count.

Kaine said he and Holton worked remotely and isolated themselves from others and were symptom free by mid-April. Holton is the interim president of George Mason University.

Antibody tests are different from the nasal swab tests currently used to diagnose active infections. Instead, the tests look for blood proteins called antibodies, which the body produces days or weeks after fighting an infection.

An antibody test might show if you had COVID-19 in the recent past, which most experts think gives people some protection.