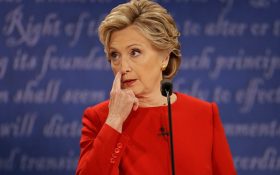 In an interview Tuesday on Fox News’ Fox & Friends, Mook admitted that the Clinton campaign had been informed by intelligence officials of wiretaps involving then nominee Donald Trump.

“There was a wiretap of Russian agents,” Mook said. “Those agents were communicating with Trump staff. That is why they were picked up.”

But why was the Clinton campaign informed about it?

When asked how he had that information, Mook replied, “That’s what the intelligence community has told us.”

This is a major slip-up, because if it’s true it means big trouble for both Clinton and Obama.

If the Obama administration was leaking wiretapped information to a political campaign, that is a serious felony offense.

And, if proven, it could mean jail time — all because of Mook’s accidental confession.

You can see former Clinton campaign manager’s mistake below: