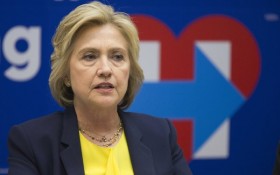 The 2016 Democratic presidential primary was one of the most contentious in recent history.

Sanders supporters claim the Clinton campaign used a mountain of dirty tricks to win —  everything from backroom establishment deals to widespread accusations of election fraud.

A shocking new report says they can add dirty campaign money to that pile.

“A super-PAC backing Hillary Clinton has accepted $200,000 in donations from a company holding multiple contracts with the federal government — despite a ban on such contributions,” The Hill reported Wednesday.

The revelation came from a review of contributions, which found that the Suffolk Construction Company, Inc. in Boston made two apparently illegal donations of $100,000 to Priorities USA, a political super-PAC which used the money to help Clinton throughout the primary.

According to data gained from USASpending.gov, Suffolk — a multi-billion dollar construction company — had nearly a million dollars worth of government contracts at the time of the donations, which legally barred it from making political contributions.

“The donations from Suffolk highlight how a 70-year-old campaign finance law meant to prevent pay-to-play deals between public officials and companies making money from the government is often ignored by those making the donations and those on the receiving end,” according to The Hill.

This cozy relationship between the Democratic establishment and big business has left many Sanders supporters bitter at the Clinton campaign — and it’s costing Clinton big time.

Recently released polls from both the University of Texas / Texas Politics Project and Bloomberg Politics found that approximately fifty-percent of former Sanders voters are refusing to back Clinton heading into the general election, sabotaging Clinton’s chances against Republican presidential nominee Donald Trump.

What was once a runaway lead for the Democrats has narrowed considerably in recent days between the two — CNBC called the Trump vs. Clinton match-up “too close to call” on Wednesday, citing a Quinnipiac University poll that shows the two in a virtual dead heat.

A large portion of Clinton’s struggles have to do with voters finding her untrustworthy.

This newest revelation of her campaign’s dirty money donation problem can only hurt the former secretary of state’s already poor reputation.