Clemson and Florida State to join the SEC? - The Horn News 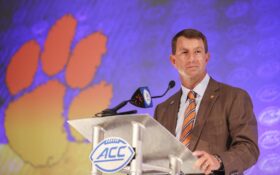 College football has seen some big shakeups in recent weeks — and rumors say other big programs are asking around.

Clemson and Florida State have asked about joining the SEC, according to reports.

The rumors were fueled by yesterday’s tweets from Marc Ryan, a radio personality on ESPN.

According to Ryan, the SEC is concerned that Clemson and Florida State wouldn’t bring the same money and attention that Oklahoma and Texas did. The two schools recently joined the conference.

Only Notre Dame would “add to the pot,” Ryan said.

Per a reliable source, Clemson+Florida State have reached out to the SEC about joining the conference.

The SEC is concerned that streaming numbers for Clemson+Florida State don't bring what Oklahoma+Texas do.

Notre Dame is the only "free agent" left that would "add to the pot."

Later that day, the sports website The Athletic asked Clemson to comment. A spokesperson at Clemson denied the rumors outright.

The Athletic reached out to Clemson about the Clemson/SEC rumor making rounds today. An athletics spokesperson just now: "There is no truth to the report that Clemson University has been in contact with the Southeastern Conference regarding membership."

Other reporters have taken issue with the sourcing of Ryan’s tweet.

The source of that Clemson/FSU “report” makes it automatically disqualifying.

And not one single person has offered a plausible way for ANY program from the ACC to walk away from the 15+ years remaining on the conference’s TV rights deal.

A conversation I had with an inside source is what I've shared. I don't "report" anything????

Nowhere have I said Clemson is lying.

Colleagues at two national 3 letter networks have reached out saying they have the same info. https://t.co/7zJytUTO22

These rumors come one week after other shakeups in the SEC’s lineup.

On July 26, Oklahoma and Texas formally announced their decisions to leave the Big 12 Conference, and each school has been admitted to the SEC.

OU and UT will join the SEC sometime after the 2025 season, as they are restricted by their current contracts with the Big 12. The two schools may attempt to renegotiate these contracts.

The SEC currently includes 14 teams. If the rumors are true, then it will grow to include four more.

No official speaker from FSU has commented on the rumors at this time.