Civil war! Liberal groups fight each other - The Horn News 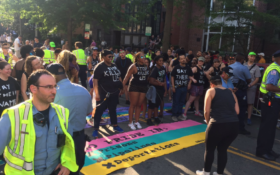 The radical fringe is pushing America to the brink of a civil war — and not just with gunfire aimed at Republican Congressmen, mock executions of the president, or the rioters roughing up Trump supporters.

Liberals are now in a full-blown meltdown, and they’re warring against each other. To see what we mean, just take a look at Black Lives Matters activists who protested against a gay pride march.

The Left waged war on itself right on the streets of the nation’s capital on June 10 — and the mainstream media doesn’t want this news getting out.

A group calling itself “No Justice No Peace” started a protest in the middle of the D.C. Capital Gay Pride Parade, because the gay pride march included homosexual police officers.

The protesters, who are aligned with Black Lives Matter, crowded the parade pathway, blocking a D.C. police cruiser that was taking part in the parade. They hatefully chanted at the officers: “Hey-hey, ho-ho, these racist cops have got to go!”

Racist? The Washington Metropolitan Police Department is mostly minority. More than two-out-of-three employees is from a minority background — 59 percent are black, according to a 2015 report from Governing magazine.

But to the Black Lives Matter crowd, all cops are racist… even if they’re black and gay.

The demonstrators had an ulterior motive, of course. They wanted money. They demanded the parade’s organizers increase funding to one of their affiliates and that a black transgender person be hired by the march’s organizing committee, the Capital Pride Alliance.

They’re likely to get their way. They always do.

Black Lives Matter has been targeting police everywhere — sometimes violently. But now they’ve demanded that police not take part in left-wing marches, except to spend hundreds of thousands of dollars keeping marchers safe at taxpayer expense.

BLM’s latest protest comes almost one year to the day they pulled the exact same stunt in Toronto. Black Lives Matter protesters shut down the gay pride march for 30 minutes with a list of demands, mostly demanding more cash. All of them were met.

Gay protesters “are weak and allowed themselves to be bullied,” said veteran gay organizer Brian Provini, a retired professor upset by how easily his organization rolled over in the face of radical demands. “BLM is a hate group.”

The group’s cop-hating agenda tried to block police from the gay pride parade in San Francisco last year — even though police just wanted to keep everyone safe, since that parade took place shortly after a Muslim terrorist slaughtered 49 Americans in a gay bar in Orlando.

They claimed have police at the parade would actually make blacks and gays more vulnerable. “We know firsthand that increasing the police presence at Pride does not increase safety for all people,” said Black Lives Matter organizer Malkia Cyril. The group said having police involved was like “militarizing” the march.

Little by little, the Left has turned against each other. This year’s L.A. gay pride parade dubbed itself became a “Resist March.” Organizers decided they have to give the podium to Black Lives Matter, Planned Parenthood, and the ACLU.

If you’re gay and you don’t support killing cops, taxpayer-funded abortion, or the ACLU’s flag-burning agenda… too bad. You have no place in their parade. Only true left-wing radicals are invited now.

Look at how these groups have persecuted other people who tried to be on their side:

The Left is trying to purify itself of anyone who might have sympathy for or mercy on conservatives.

What does it plan to do to conservatives after that?