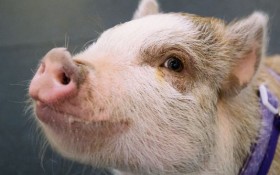 In a nod to the annual tradition of the U.S. president pardoning two turkeys ahead of the Thanksgiving holiday, a pair of pigs has been spared from roasting for Christmas Eve feasts in Miami.

Miami-Dade County Mayor Carlos Gimenez said he was instituting a new holiday tradition when he pardoned little pigs Layla and Luna outside a Miami restaurant Wednesday.

In a Miami Herald video , Latin Cafe 2000 owner Katherine Castellanos said she was inspired to suggest the pig pardons because her restaurant has been busy filling catering orders for lechon, or roasted pig.

She said that when South Florida families sit down for a holiday meal, “we don’t eat turkey, we eat lechon.”