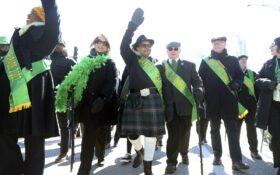 St. Patrick’s Day celebrations across the country are back after a two-year hiatus, including the nation’s largest in New York City, in a sign of growing hope that the worst of the coronavirus pandemic may be over.

The holiday served as a key marker in the outbreak’s progression, with parades celebrating Irish heritage among the first big public events to be called off in 2020. An ominous acceleration in infections quickly cascaded into broad shutdowns.

The full-fledged return of New York’s parade on Thursday coincided with the city’s wider reopening. Major mask and vaccination rules were recently lifted.

The city’s famed Fifth Avenue was awash with green, as hordes of revelers took to sidewalks amid damp skies to take part in the tradition for the first time in two years.

Kathy Brucia, 65, has been attending the parade for more than three decades, she said — except the past two years.

“The pandemic,” she said. “I don’t think it’s over. But I think a lot of people feel like, wow, we could finally go to a parade and not worry. But I think everybody has to worry,” she said as the first marching band passed by Thursday morning.

“I love St. Patrick’s Day. It’s one of my favorite, favorite holidays,” said Brucia, who is Irish and was clad in green, including a shamrock on her cheek.

The day held great importance for a city still reeling from the outbreak.

“Psychologically, it means a lot,” said Sean Lane, the chair of the parade’s organizing group. “New York really needs this.”

The city’s entertainment and nightlife scenes have particularly welcomed the return to a normal St. Patrick’s Day party.

“This is the best thing that happened to us in two years,” said Mike Carty, the Ireland-born owner of Rosie O’Grady’s, a restaurant and pub in the Theater District.

“We need the business, and this really kicked it off,” said Carty, who will be hosting the parade’s grand marshal after the procession.

Celebrations returned to other cities, too.

The South’s largest St. Patrick’s Day celebration made a big comeback in Savannah, Georgia, where Irish immigrants and their descendants have held parades since 1824. After nearly two centuries, the holiday has become Savannah’s most profitable tourist draw, a street party for hundreds of thousands still thirsty after Mardi Gras.

Tori Purvis, 46, arrived before dawn to claim a spot near the start of the parade along with her 3-year-old son, Tristan, still wearing his pajamas decorated with leprechaun hats and rainbows. Purvis said she’s been celebrating St. Patrick’s Day in Savannah since childhood, and the only years she recalls not showing up were 2020 and 2021 when the pandemic forced the parade to be canceled.

“I’m not against masks or anything, but it’s nice to see people outside without masks and enjoying their time,” Purvis said. “It’s like a little bit of normalcy is coming back.”

Over the weekend, Chicago dyed its river green, after doing so without much fanfare last year and skipping the tradition altogether during the initial virus onslaught.

Boston, home to one of the country’s largest Irish enclaves, is resuming its annual parade Sunday after a two-year absence.

Some communities in Florida, one of the first states to reopen its economy, were also bringing their parades back.

Florida Gov. Ron DeSantis chose St. Patrick’s Day two years ago to shutter restaurants, bars and nightclubs — a dramatic move by the Republican and which underscored the fear and uncertainty of the time.

Since then, DeSantis has been one of the country’s leading voices against mask and vaccine mandates, as well as other pandemic measures.

New York’s parade — the largest and oldest of them all, first held in 1762 — runs 35 blocks along Fifth Avenue, past St. Patrick’s Cathedral and along Central Park.

It’s being held as the city emerges from a discouraging bout with the highly contagious omicron variant, which killed more than 4,000 people in New York City in January and February.

New infections and hospitalizations have declined since the surge, prompting city officials to green-light the procession.

On the eve of the holiday, Mayor Eric Adams raised the Irish flag at a park located on the southern tip of Manhattan, not far from Ellis Island, to honor the city’s Irish history.

“This St. Patrick’s Day, we honor those Irish immigrants who relocated and helped build our city, and the many Irish Americans who serve New York City to this day,” the mayor said. “Today, we celebrate the fighting spirit of the Irish with the courage and resilience of this entire city.”

Currently, you don’t need to show proof of vaccination to dine indoors at a restaurant in New York, but huge numbers of people still wear masks in public and avoid big crowds.

This year’s parade is two years in the making, after token processions during the pandemic.

To keep the tradition going, organizers in 2020 and 2021 quietly held small parades on St. Patrick’s Day, right around sunrise, when the streets were empty. Bagpipes accompanied a tiny contingent of officials and a smattering of people drawn by the music.

Thousands of people showed up for this year’s parade — organizers had expected a large crowd — even as many New Yorkers remain skittish about massive, potentially virus-spreading public events.

Organizers hope people will turn out not just to commemorate the holiday, but to honor the first responders who helped the city get through the pandemic, as well as in support of a delegation of Ukrainian marchers bringing attention to the war in their homeland.