Cinema icon passes away at 79 - The Horn News 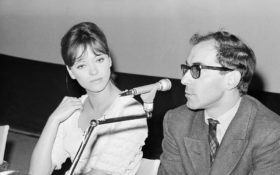 Anna Karina, the French New Wave actress who became an icon of the cinema in the 1960s and was the muse of Jean-Luc Godard, has died. She was 79.

The French culture minister announced her death on Twitter on Sunday. French media said that the Danish-born Karina had cancer and died Saturday.

’’Her look was the look of the New Wave. It will remain so forever,″ Culture Minister Franck Riester tweeted.

“Anna Karina radiated. She magnetized the entire world,”′ Riester said, adding that ’’French cinema has lost one of its legends.″

Karina made seven films with Godard, her partner at the time, including the 1961 “Une Femme Est Une Femme″ (A Woman is a Woman), in which she played a femme fatale. For that, she received the best actress award at the Berlin Film Festival. Other cult Godard movies starring Karina included the 1962 ”Vivre Sa Vie’” (Live Your Life) and the 1965 “Pierrot Le Fou.”

The French New Wave broke with traditional cinematic conventions to create a fresh approach to making movies, in keeping with the free-spirited times.

Godard wasn’t the only director with whom Karina worked. Jacques Rivette’s 1966 film “La Religieuse” (The Nun), adapted from the 18th-century French novel by Diderot, was initially banned. The story of a young woman forced into the convent by her mother, who had given birth out of wedlock, was revived in a restored version and presented at the 2018 Cannes film festival.

Born Hanne Karin Blarke Bayer in Denmark, she initially modeled and sang in cabarets before coming to France. She was reportedly discovered, and renamed, by Coco Chanel, then discovered by Godard.

Karina also worked, among other illustrious directors, with Luchino Visconti.

In a bold undertaking at the time, the actress later got behind the camera to make her own movie in 1973, “Vivre Ensemble″ (Living Together).

Films that Karina has appeared in will be shown on the silver screen again with a retrospective of Godard starting next month at the Cinemateque, a noted film institution in France which she had frequented.