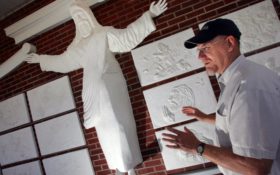 A Baptist church’s congregation has voted to remove a statue of Jesus Christ because some believe it’s too “Catholic” for their place of worship.

The State newspaper cites a letter sent by leaders of the Red Bank Baptist Church in South Carolina to Bert Baker Jr., a former member of the congregation who hand-carved the 7-foot statue and accompanying reliefs showing scenes from the life of Christ.

The art has been displayed in the church for a decade, but the pastor told the artist it’s being taken down this week. The letter says some in the congregation believe the image of Christ standing with his arms outstretched is “Catholic in nature.”

The artist responded that the pastor’s letter displays religious prejudice and insults the community’s intelligence.