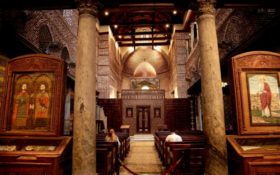 Being the only millennial, AD3 took matters into his own hands and sat down with his deacons to discuss what was to come.

“The entire dynamic of our church was about to change,” AD3 recalled of the fateful 2006 meeting.

The first things to go: no suits on Sundays, shorter services and the choir would now be called “the worship team.”

The congregation’s response was rough — membership went from 300 down to a major low of 85.

“Any time you’re shifting culture, there’s going to be some casualties,” AD3 says.

But, since the renaming of the church to City of Truth, the congregation has bounced back… in a huge way.

Sponsored: Geologist unearths the next BIG thing. See all the details here.

Now, with over 1,000 members the Sunday services were forced to move to a nearby high school auditorium.

And shockingly, a majority of the membership is under the age of 35.

“The role of the church is to see a need, meet a need,” AD3 says. And he sure has met the needs of most millennials!

“Those changes were about doing an introspection on what the need was and being willing to do everything it takes to meet that need. If that meant tearing down walls of tradition, so be it.”

The way of life for many millennials is to constantly be on the move. In a traditional church setting, they would feel stuck — but with shorter service and a more relaxed culture, AD3 is definitely meeting their needs.

In a 2015 study by Pew Research Center concluded that only 27 percent of Americans born between 1981-1995 regularly attended weekly service.

Since the study was published, many churches have created special programs to cater to millennials. And it’s working.

“The best way to engage millennials is to be as unique as they are,” says Scott Chrostek, author of “The Kaleidoscope Effect: What Emerging Generations Seek in Leaders” and pastor of the Church of the Resurrection Downtown.

Chrostek’s own church has become a growing spot for millennials to worship.

“When you talk about the ministry and trying to resonate with younger folks, you’ve got to meet them where they are,” said Chrostek.

As is true with many things in life, millennials are always up for something new and exciting.

By churches growing and adapting to these needs of younger members — they are setting themselves up for success.

Church congregations are bouncing back, and a new culture is to thank for that.