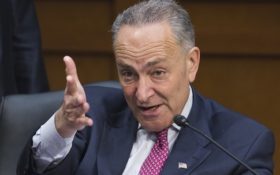 Senate Minority Leader Chuck Schumer, D-N.Y. woke up Thursday to bad news about the 2020 election — but it’s great for President Donald Trump and his political allies.

Democrats already had an uphill fight in their quest to retake the Senate, currently in control of Republicans.

Schumer found out Thursday morning that the upcoming election just got much, much harder for his party to win.

Sen. Joe Manchin, D-W.V., is seriously considering calling it quits and heading back to West Virginia before his term is over, The Hill reports.

“I haven’t been happy since I’ve been [elected to the Senate]. I’ve always thought there was more we can do,” Manchin said in an interview. “It’s the greatest body in the world, so much good could be done.”

“I have people back home that want me to come back and run for governor,” he revealed. “We’re looking at all the different plays. I want to make sure whatever time I have left in public service is productive.”

The breaking point for Machin was reportedly right before Congress’ Memorial Day recess, at the end of a debate over a disaster relief bill.

A Democratic senator told The Hill that a furious Machin threatened to retire before the end of the 116th Congress.

“He said, ‘I’m out of here.’ He was all pissed off and said, ‘I’m going to be out of here,’ ” the lawmaker reportedly told The Hill.

If Machin leaves his senatorial seat early, the decision could play a huge role in deciding which party controls the Senate after the next election.

Democrats hold 47 seats and face a tough battle in numerous red states in the 2020 election.

West Virginia is a Republican stronghold. Trump carried the state by a staggering 40 points in the 2016 presidential election.

That means Machin, a centrist Democrat, would likely be replaced by a very conservative Republican senator.

So Washington, D.C. would get yet another senator that backs Trump… at the cost of one that backs Schumer.