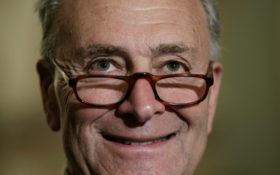 Schumer vowed to continue to wield Congress as a weapon against President Donald Trump.

In a blistering speech on Tuesday, McConnell accused Democrats of trying to cause a “national crisis” that they’d use as a power grab.

He called for an end to their political theater regarding special counsel Robert Mueller’s report on Russian meddling in the 2016 election and asked for unity.

“This investigation went on for two years,” McConnell said. “It is finally over.”

“Many Americans were waiting to see how elected officials would respond,” he continued. “With an exhaustive investigation complete, would the country finally unify and confront the real challenges before us?”

“Would we finally be able to move on from partisan paralysis and breathless conspiracy theorizing? Or, would we remain consumed by unhinged partisanship and keep guiding ourselves to the point that Putin and his agents need only sit on the sidelines and watch us as their job is actually done for them?” McConnell asked.

“Regrettably, the answer is now pretty obvious,” he said.

“They seemed to be hoping for a national crisis for the sake of their own politics,” McConnell said later in his speech.

The GOP senator went on to complain that former President Barack Obama was to blame for letting Russia “get away with almost anything.” McConnell pointed out that Democrats are “angrier at [Attorney General William] Barr for doing his job than they are at Vladimir Putin.”

Enraged, Schumer responded by dismissing the call for unity.

House Majority Leader Nancy Pelosi joined Schumer in issuing a statement, calling the speech “a stunning act of political cynicism and a brazen violation of the oath we all take.”

Schumer later said that McConnell’s bipartisan appeal was “despicable” and that Democrats had “only just begun” to launch investigations of the White House.

“To say that it’s over, case closed, when we haven’t even begun to investigate the report and Mueller hasn’t testified – and it’s who Mueller knows what the report says, not Barr’s spin on that report – to not see the underlying documentation and how deeply Russia affected things and what they might do in 2020,” Schumer said.

“For McConnell to do this?” Schumer said. “For Trump to do this? It is despicable.”

Who do you think is right?