Chuck Schumer RIPPED for hypocrisy (by other Dems!) - The Horn News 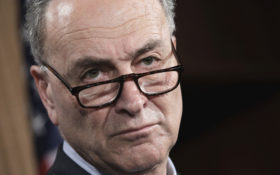 Sen. Chuck Schumer is being SLAMMED for his two-faced political personality… and the latest criticism of the New York Democrat isn’t coming from the other side of the political aisle.

He’s under attack by his own liberal allies!

Schumer and others on the left have attacked President Donald Trump for filling key posts with industry insiders, as if real-world experience is somehow BAD.

But at the same time, they’ve been BUSTED trying to push their own industry insiders into similar positions!

Most regulatory agencies are required to have a mix of Republicans and Democrats, with the president appointing members of his party and the head of the opposition party in the Senate — in this case, Schumer — choosing the others.

And the left isn’t exactly happy with some of the names that have been floated for those positions, according to International Business Times.

“Senate Democrats have far too often pushed corporate cronies through the revolving door onto open spots on key commissions like the FTC, SEC, and FCC,” Jeff Hauser, who runs the liberal Revolving Door Project, told IBT.

He told the website that people are now watching their elected officials more closely than ever, and won’t let Schumer and his fellow Democrats “get away with pushing corporate hacks onto public watchdog boards.”

In other words, even liberals want to “drain the swamp.”

The same allegations Democrats like Schumer have thrown at Trump are now coming right back at them!

That’s not the only example of hypocrisy from the left on the subject of federal appointments, either.

Schumer and other Democrats have slammed Trump for appointing industry insiders to key positions, such as Wilbur Ross at the Commerce Department.

But they’ve also ripped into Trump for hiring “inexperienced” outsiders, like Rick Perry in the Department of Energy and Dr. Ben Carson at Housing and Urban Development.

They’ve even torn into the president for not hiring anyone at all for positions that have so far gone vacant.

Of course, this level of hypocrisy is par for the course with Schumer.

The senator today acts as if he and Trump barely know each other.

“We see each other occasionally at events in New York,” Schumer said last year, according to Business Insider. “But I really didn’t know him very well.”

Between 1996 and 2010, his campaign received $9,000 directly from Trump, along with another $6,800 from Ivanka, Eric and Donald Jr. and $4,000 from Jared Kushner, the husband of Ivanka and top White House advisor, according to The Blaze.

When Trump spotted Schumer at a bipartisan dinner in the heat of the campaign last October, he called out to him.

“Hi Chuck,” Trump said from the dais at the Alfred E. Smith dinner. “He used to love me — when I was a Democrat.”

As Schumer and other Democrats like to point out, Trump hasn’t changed and isn’t about to. He’s the same man he’s always been… but because he’s now a Republican president instead of a Democrat donor, they refuse to work with him.

In other words, they’re putting their party ahead of the country — the same accusation they love to hurl at Republicans.

Call it one more example of hypocrisy from the left.