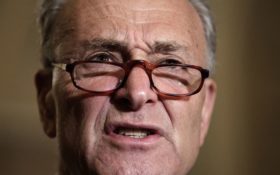 He was called out as a liar by none other than former President Barack Obama.

Speaking on the economy at an Exxon gas station near Capitol Hill, Schumer used his publicity stunt to try and blame Trump for rising gas prices.

“Gas prices will roughly cancel out the 2018 consumption boost from the tax cuts,” Schumer claimed. “That’s right, whatever meager benefit working families may have seen from Trump’s tax scam for the rich has been wiped out by the gas prices that President Trump is responsible for.”

That’s not true at all, business and economics experts say. It’s a lie Schumer has repeated numerous times in the past — which is evidence, critics say, that Schumer doesn’t understand even the most basic parts of economics.

This is High School-level stuff, folks. It’s something the Senate Minority Leader should absolutely know if he expects to effectively govern.

Even Obama — not exactly a master of economics himself — knows better.

“The next time you hear some politician trotting out some three-point plan for $2 gas, you let ’em know, we know better,” Obama said in 2012, aimed at then-Republican presidential candidate Newt Gingrich.

Ouch. While the comments were aimed at Gingrich, they’re something Schumer needs to hear this election year.

The Horn News may not agree with Obama much, but even a broken clock is right twice a day.