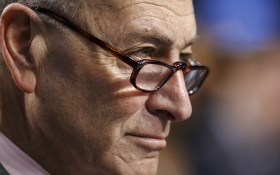 The two “open borders” advocates even got into a tussle over the proposed border wall with President Donald Trump in the Oval Office on Tuesday.

But they’ve been awful silent about an invitation to see it for themselves.

America’s border patrol agents have a dangerous job — and the men and women protecting our southern border say the wall is absolutely essential.

One of their leaders went on Fox News and invited Schumer to come see for himself.

“I heard some of the words they said earlier… and they were attacking the president, attacking the wall,” Del Cueto said. “And you know what? Nancy Pelosi and Schumer can come down here and help us patrol the border and I’ll show them how difficult and how dangerous it really is and how that wall makes a difference.”

Think Pelosi and Schumer will head south and do their civic duty? Will they actually listen to the brave men and women patrolling the border?

So far, the camera-friendly Schumer has been awful quiet about the invite.