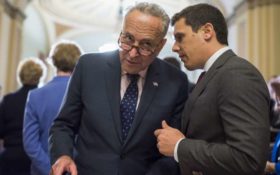 Senate Minority Leader Chuck Schumer may have just suffered his most embarrassing moment yet.

He was unknowingly caught on tape discussing his relationship with President Donald Trump, and sounded like a teenage girl gushing when he said, “He like me.”

The comments were made Thursday during a C-SPAN broadcast that showed a wide shot of the Senate floor.

Schumer can be heard saying, “He like us. He likes me, anyway,” when talking about Trump.

He continued, “And it’ll make us [Democrats] more productive, too.”

While he gushed about Trump, their history indicates otherwise.

And while he has lately indicated he’s more willing to listen to the left’s point of view on immigration, Schumer’s hot-mic moment may show a sense of false hope from the left.

Does the Catholic church know about this? [sponsored]

Trump has been in discussion with Democrats towards reaching a bipartisan solution to DACA, showing a willingness to reach across the aisle in order to move forward.

But now Trump will likely be less open to negotiations with Schumer after these leaked comments, as any appearance of the president being influenced by Democrats would be undoubtedly embarrassing.

See the video below: