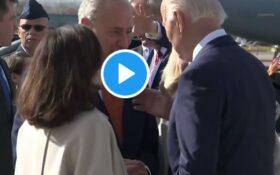 And they’re struggling to comet to terms with the polls.

“The state where we’re going downhill is Georgia. It’s hard to believe that they will go for Herschel Walker,” Schumer told Biden while they were meeting at Hancock Field Air National Guard Base in Syracuse, New York.

Schumer and Biden are in upstate New York to meet with New York Gov. Kathy Hochul.

The Democratic leaders are hoping to bolster Hochul’s floundering re-election campaign. Hochul is running neck-and-neck in polls with Republican gubernatorial challenger Lee Zeldin despite running in a traditional Democratic stronghold.

It wasn’t all doom and gloom from Schumer.

“Our vote — our early turnout in Georgia is huge,” Schumer was overheard saying. “Huge.”

He also remained optimistic about Democratic chances to gain a Senate seat in Pennsylvania.

“It looks like the debate didn’t hurt us too much in Pennsylvania,” Schumer told Biden. “So, that’s good.”

Take a listen for yourself —

🚨Schumer to Biden: "The state where we're going downhill is Georgia. It's hard to believe that they will go for Herschel Walker." pic.twitter.com/m5ELvQAUYO