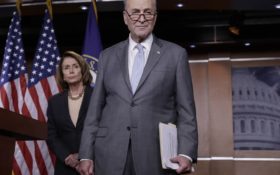 Senate Minority Leader Chuck Schumer has said a lot of things about the illegal immigration — and critics say this video is proof that the Democratic Party’s leader is not being honest with the American people about the Deferred Action for Childhood Arrivals (DACA) program, which that shields illegal immigrants from deportation.

What does Schumer really think about illegal immigrants?

He’s both for and against DACA, the video shows. It seems he’ll say anything for political gain.

“People who enter the United States without our permission are illegal aliens, and illegal aliens should not be treated the same as people who entered the U.S. legally,” Schumer says in one part of the video when referencing DACA. Then, side-by-side to his own image, Schumer’s contradicts himself.

“The president’s decision to end DACA was heartless and it was brainless,” Schumer said in the more recent video.

“When we use phrases like undocumented workers, we convey a message to the American people that their government is not serious about combating illegal immigration,” Schumer said about politicians that refuse to use the term “illegal.”

“Hundreds, hundreds of thousands of families will be ripped apart,” Schumer said when defending DACA.

“If you don’t think it’s illegal, you’re not going to say it. I think it is illegal — and wrong,” Schumer said attacking illegal immigration.

“A biometric-based employer verification system — with tough enforcement and auditing — is necessary to significantly diminish the job magnet that attracts illegal aliens to the United States,” Schumer said about DACA.

“They may have known no other country but ours, and have voluntarily registered themselves,” Schumer said in his defense of illegal DACA immigrants.

“All illegal aliens present in the United States on the date of enactment of our bill must quickly register their presence with the United States government, or face imminent deportation,” Schumer said, proving DACA registration wasn’t voluntary.

The video goes on to show former Secretary of State Hillary Clinton making strong statements against illegal immigrants and so-called “Dreamers” — children who were brought to the United States illegally and are being defended by these same Democrats.

Then, former President Barack Obama is shown explaining to college students why DACA would be illegal if he signed it into law through executive order — which, of course, he later did.

You can see the jaw dropping video here —

Who has your support: Chuck Schumer or Donald Trump?