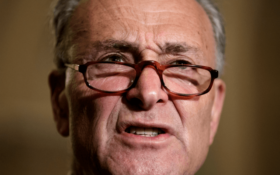 President Donald Trump announced Wednesday a proposal for a military parade in 2018 — and the mainstream media responded with furious condemnation.

Liberal politicians claimed they were strongly against the thought of showing off the most powerful military in the world. The president was quickly criticized on every major news outlet.

But, thanks to the amazing wonders of the Internet, a video has resurfaced of Senate Minority Leader Chuck Schumer vocally supporting a military parade happening on American soil in 2014. And not a single news outlet reacted negatively.

Contrary to the mainstream media headlines, it was not so long ago that a similar proposal to Trump’s military parade was made… by Democratic leadership.

The United States has actually held military parades since the at least 1865 — including one in Washington, D.C. in 1991. But, the fake news reports would never tell America that.

“The brave men and women who have selflessly served our nation with courage and skill in Iraq and Afghanistan deserve a recognition for their sacrifice. I stand with Sen. Schumer in his call for a parade to honor our veteran heroes, and New York City would be proud to host this important event,” de Blasio said.

All the fake news media reports that Trump’s call for a military parade is a waste of time and money is just another way to divide America over a simple, patrotic idea. And this video proves how inconsistent and hypocritical the left really are —

Thank you, Mr. Schumer, for once again proving to Americans that consistency is not quality of the Democratic party.