Chuck Norris: My wife was poisoned (by Big Pharma!) - The Horn News 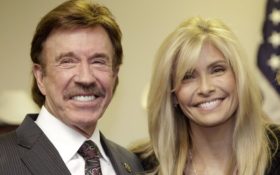 Norris also claims Big Pharma tried to cover-up their near-fatal mistake — but he’s not going to take it lying down.

The Norris family claims that Gina went to the doctors for a few routine MRIs to check on her rheumatoid arthritis.

What happened next spiraled into a nightmare for the entire family.

According to a statement made by Norris, Gina was injected with gadolinium contrast dye — a substance used for improving clarity of MRIs.

Everything went downhill from there.

“Those multiple MRIs yielded little about her arthritis, but they did give her gadolinium poisoning that nearly took her life, and then chronically led to gadolinium deposition disease,” he wrote.

The symptoms that Gina has been suffering from have been debilitating, and she’s reportedly on her death-bed.

Even for the big star, the financial burden placed on the family has taken a huge toll.

“We’ve spent almost $2 million in out-of-pocket medical expenses to save her and provide some quality of life,” he claimed.

To break it all down, gadolinium is a metal found in so-called contrast agents used in many MRIs.

The U.S. Food and Drug Administration claims there is no evidence that retained gadolinium is harmful to the human body. However, a European health agency has chosen to suspend the use of the contrast agent in a precautionary effort.

“Big Pharma and the FDA have told millions upon millions of MRI recipients that gadolinium-based contrast agents, or GBCAs, are harmless and flush quickly out of the human body. But nothing could be further from the truth,” Norris wrote.

The law firm representing the Norris family has filed numerous lawsuits in recent weeks on behalf of other folks also suffering from gadolinium poisoning.

“One of the problems is this is a very misdiagnosed and underdiagnosed condition,” said Todd Walburg, an attorney for the Norris’.

The Norris’ are claiming Big Pharma has repeated lied and covered-up health issues in the past, and say they do not want anyone else to suffer like Gina has.

Critics say Big Pharma has been operating against the public good for decades — and if they continue to remain silent on gadolinium health risks, it could cost more lives.