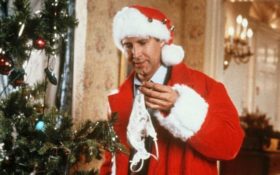 A holiday display meant to re-create a scene from “National Lampoon’s Christmas Vacation” looked a little too real and caused a veteran to spring into action.

The Heerlein family placed a dummy representing Clark Griswold dangling from the gutter of their Austin, Texas, home, with a ladder tipping beneath him.

A veteran passing by thought it was the real thing and wrestled the ladder up while shouting, “Can you reach it?”

KVUE-TV reports the man called police, who arrived and advised the family they were getting calls about the display.

They have since put up a sign that says “Clark G is part of our Christmas display please do not call 911.”