Christians under attack by Muslim migrants - The Horn News 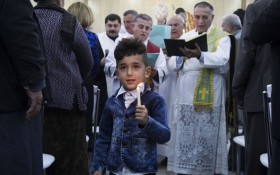 The biggest cover-up in Europe today could be a peek at the United States of tomorrow – especially if the leftists trying to force our borders open to millions of Muslim refugees have their way.

It’s not being widely reported in the media, and even the police have been practically ordered to look away.

But a new report shows how the attempt to assimilate hundreds of thousands of Muslim refugees is failing – because many of them are already committing the same types of atrocities they claim to have fled.

Christian asylum-seekers in German refugee camps are being persecuted, beaten, robbed, sexually assaulted and then forced into silence by the Muslims who now make up the majority in those facilities.

Many Christians are left wondering if the oppression they fled in places such as Iran and Afghanistan might’ve been better than the nightmare they’ve now been forced into.

“I came to Germany after fleeing my own country in the hope my life would be safer in the face of growing dangers,” one unnamed Christian refugee told investigators from the charity Open Doors. “But in Germany I’ve been threatened more.”

The new report by Open Doors paints a damning picture of life inside German camps, showing how a Muslim majority is emboldened to do whatever it wants to the few Christians inside with impunity.

Nearly 90 percent of Christians surveyed by the charity said they’ve been targeted because of their faith, and three out of four said harassment by Muslims is a “frequent” problem.

Nearly a third said they’ve been given death threats, 37 percent have been beaten and there were reports of “physical attacks in the form of punches, spitting, pushing and sexual abuse,” according to the report.

And that may not be the worst of it.

Thomas Muller, an Open Doors persecution analyst, said “it is likely that the report only shows the tip of the iceberg” because many fear more persecution if they report these incidents.

“There is genuine fear that the information could get into the wrong hands and cause danger for relatives still living in their home countries. Others have given up all hope of receiving help,” the report states.

The camps have security guards… except most are hired based on their language skills, which means they’re Muslims too. Instead of stopping the attacks, they’re actually participating in them.

Berlin-based pastor Gottfried Martens told Germany’s Deutsche Welle he knows of a case where a shelter leader tore up Bibles and took beds away from Christians, forcing them to sleep on the floor for months.

If a Christian ever tore up a Koran, Muslims would riot!

Others report the ultimate indignity: Their food is being taken away.

“When we collect our welfare stipend, we are pushed to the end of the line. Also in the kitchen, we are the last to eat,” one Christian refugee said, according to the Gatestone Institute. “Muslims call us mortad (apostates) and steal from the kitchen. They have stolen so much of our food that every room now has a refrigerator.”

They can’t even get help from the police, who “deliberately downplayed and even covered up the ‘taboo issue’ of Muslim attacks on Christian refugees, apparently to avoid fueling anti-immigration sentiments,” according to the Gatestone analysis of the report.

Despite these and other alarming reports out of Europe, President Barack Obama is still pushing his plan to allow 100,000 refugees from Iraq and Syria into the United States, including 10,000 this year alone.

Congress opposes the plan. The American people oppose the plan, with more than half objecting to it in a Quinnipiac University poll.

Someone should make sure Obama sees this report before he takes another step to open our borders.