Christian persecution on the rise (scary!) - The Horn News 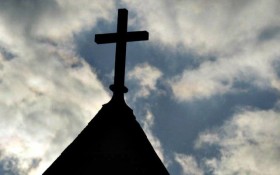 The most persecuted people on the planet aren’t Muslims in America… despite what the media wants you to believe.

It’s Christians — not only here, but all around the world.

A frightening new report confirms an ugly trend – one that America’s faithful worry is already spreading at home. But don’t expect to see this on CNN or MSNBC anytime soon — Democrats will be to blame for Christian persecution in America and a leading faith expert proved it.

The Pew Research Institute finds that Christians are persecuted in 143 nations, which is more than any other religious group.

The question has to be asked… could the United States one day face sanctions in just such a scenario?

It’s possible, as the left pushes the government not only away from Christianity but toward open hostility against the faithful — even punishing Americans and U.S. companies for holding true to their religious beliefs.

And Christian leaders have warned that this isn’t some far-fetched scenario from the distant future.

It could happen sooner than you think, with Franklin Graham saying the Equality Act backed by Democrats would allow retribution against Christian employers if it’s passed.

Under that proposal, companies with 15 or more employees would be forced to to recognize “gender identity” and turn “sexual orientation” into a protected class, among other things.

“Christians will be persecuted for their sincerely held beliefs as never before,” he wrote in the Billy Graham Evangelistic Association’s “Decision” magazine, according to WND.

Others have said that’s exactly why American Christians must not only stick up for their own beliefs, but stand up for their fellow Christians facing persecution around the world.

David Curry, CEO of Open Doors, wrote in USA Today last month that U.S. churches have come to rely on “upbeat music and positivity” to bring in crowds and donors — and in so doing may have become “completely detached from the experience of the global church.”

That includes members of the church facing persecution in other nations, where 345 Christians are killed every month because of their beliefs, according to the organization’s numbers.

Curry said helping to protect those Christians around the world could ultimately help the church here in the United States.

“The persecuted church around the world is giving us clues on how Christians can survive, and in some cases thrive, in the face of danger,” he wrote. “In those lessons, we can find inspiration to deepen our own faith — which might come in handy as persecution comes to the West.”