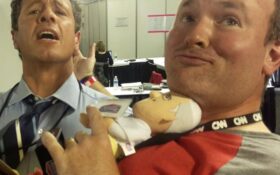 The prosecution has accused Griffin of bribing witnesses.

In a press release from Dec. 10, federal prosecutors were already alleging that Griffin had paid for his victims’ travel expenses.

“Griffin has tried to deceive, delete, and spend his way out of being held accountable,” the prosecutor wrote, according to Fox. “He is a wealthy man who will be desperate to avoid facing justice.”

Then, the prosecutor reportedly laid out the “substantial” evidence against Griffin.

Griffin shelled out $30,000 for one family’s mother-daughter trip to his ski lodge in Vermont, according to the press release. Then, according to the motion, he messaged another relative of the woman, offered him money, and asked for “help.”

“This apparent pay-off of a potential witness is not only further evidence of wrong-doing, it is an independent reason for Griffin’s detention,” the prosecutor wrote, according to Fox.

According to Fox, the prosecutor asked the judge to hold Griffin in jail — without bail — for the remainder of the case.

To support his request, the prosecutor reportedly mentioned the other allegations of bribery against Griffin.

Griffin crashed into someone else’s car last year, and then he tried paying hush money to the other driver, according to Fox’s records. Griffin was ultimately charged with a DUI, anyway.

Griffin has built a career as a television producer for ABC News, CBS News, Fox News Channel, and — most recently — CNN’s New Day. Griffin wrote on his LinkedIn profile, “Works shoulder-to-shoulder with lead anchor Chris Cuomo, seeing him through each show.”

Chris Cuomo was fired by CNN for “involvement with his brothers defense” against allegations of sexual harassment, according to a CNN statement.

Griffin is scheduled for arraignment this Wednesday at a federal court in Burlington, Vermont.