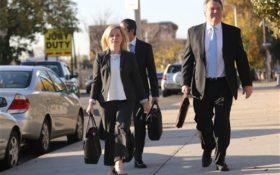 Federal prosecutors will resume their cross-examination of a former aide to New Jersey Gov. Chris Christie who is facing criminal charges in the George Washington Bridge lane-closing scandal.

Kelly testified Monday that she told the Republican governor a Democratic mayor had expressed concern the resulting traffic jams in his city were political retribution. She said Christie lied three months later when he said at a news conference no one on his senior staff knew of the plot.

Kelly was Christie’s deputy chief of staff. She’s on trial with a former Port Authority of New York and New Jersey executive whom prosecutors say launched the plot as revenge against the mayor because he would not endorse Christie.

Christie has not been charged and denies any wrongdoing.