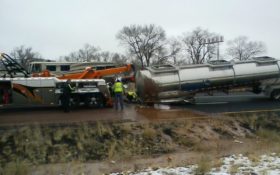 Authorities in northern Arizona had a sweet hot mess on their hands after a tank trucker’s trailer detached from the truck and rolled on its side on slick pavement, spilling a river of liquid chocolate onto westbound lanes of Interstate 40.

The Arizona Daily Sun reports the wreck Monday about 11 miles (18 kilometers) east of Flagstaff required cleanup crews to pour most of the 40,000 gallons (151,412 liters) of chocolate into the highway median to lighten the damaged tanker so it could be towed away.

The chocolate was liquid because it was being stored in the tanker at 120 degrees (49 Celsius).

State Department of Public Safety spokesman Bart Graves says there were no injuries. The driver was not cited.