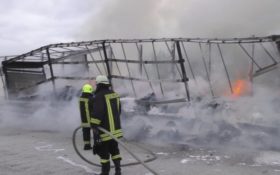 German authorities say a busy stretch of highway had to be shut down after a truck carrying 17 tons of cocoa caught fire.

Police said the fire started when the truck was on the A14 autobahn near the town of Grabow, between Berlin and Hamburg, on Monday.

They say the driver escaped unharmed but all of the cocoa was destroyed in the flames. The northbound lanes of the A14 were temporarily shut down, but photos from the scene indicate hot chocolate didn’t spill onto the autobahn.

The cause of the fire is under investigation but police said it was likely a technical defect with the truck.

Authorities say the fire caused hundreds of thousands of euros (dollars) in damage, including to a noise-barrier wall next to where the truck burned.