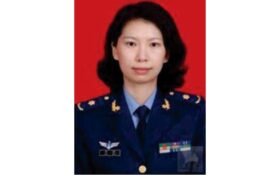 A Chinese scientist charged with visa fraud after authorities said she concealed her military ties to China in order to work in the U.S. made her first appearance Monday in federal court by video.

Juan Tang, 37, was appointed a federal public defender and U.S. Magistrate Judge Deborah Barnes ordered Tang to remain in custody, saying she is a flight risk, while her attorney prepares an argument to allow her release on bail.

The Justice Department last week announced charges against Tang and three other scientists living in the U.S., saying they lied about their status as members of China’s People’s Liberation Army. All were charged with visa fraud.

Prosecutors said Tang lied about her military ties in a visa application last October as she prepared to work at the University of California, Davis and again during an FBI interview in June. Agents found photos of Tang dressed in military uniform and reviewed articles in China identifying her military affiliation, prosecutors said.

Prosecutors said Tang sought refuge at the Chinese consulate in San Francisco after speaking with agents in June. U.S. marshals arrested her Friday and booked her into Sacramento County Jail, where she remains.

Heather Williams, a federal defender, said its common practice for people to seek help from their consulate when dealing with law enforcement abroad, and doing so did not make Tang guilty of anything, she said..

It’s too soon to know what the photos of Tang mean, and she might have made a mistake on the visa application, the lawyer said.

“We do know that our government seems to be increasingly hostile to China and we hope Dr. Tang isn’t paying the price for that hostility,” she said.

The University of California, Davis said Tang left her job in June as a visiting researcher in the Department of Radiation Oncology.

The arrests come as tensions rise between China and the U.S.