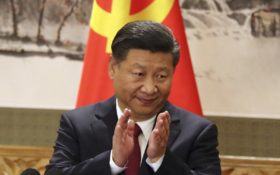 China’s ruling Communist Party’s proposed scrapping of a limit on presidential terms is upending three decades of efforts to restrict how long top leaders can hold office and setting the stage for party chief Xi Jinping to remain head of state indefinitely.

Xi is coming to the end of his first five-year term as president and is set to be appointed to his second term at an annual meeting of the rubber-stamp parliament that starts March 5. The proposal to end term limits, announced by state media on Sunday, is certain to be approved at that meeting.

A look at the history of presidential power under the People’s Republic of China and the potential effects of the move to allow Xi to remain head of state for many years to come:

Mao Zedong served as the PRC’s first “state chairman,” the formal name for president, but retained ultimate power through his dual roles as party chairman and commander of the armed forces. Over the ensuing decades, he beat off all potential challengers while continuing the ancient imperial tradition of ruling supreme until his death in 1976.

At the height of Mao’s chaotic 1966-1976 Cultural Revolution, the post of president sat vacant before being formally abolished entirely in 1975. The violent excesses of that decade, when loyal party cadres were cruelly punished along with members of the intelligentsia and the old landlords, soured many Chinese on the idea of cult-like devotion to a single leader. Following its conclusion, the post of party chairman was eliminated and state institutions revived after Mao’s passing in an attempt to avoid another catastrophic bout of one-man rule.

After asserting himself as China’s “paramount leader” in the late 1970s, Deng Xiaoping continued Mao’s precedent of exercising true power as head of the armed forces. However, Deng restored the largely ceremonial office of the president in sweeping 1982 constitutional revisions while strictly limiting it two terms.

While Deng indisputably remained in charge, power grew more diffuse in the second half of the 1980s, coming to a head in the bloody crackdown on pro-democracy protesters centered on Beijing’s Tiananmen Square in 1989, after which a trend re-emerged of consolidating power in a single person, despite fears of another Mao-style dictatorship.

Jiang Zemin added the presidency to his titles of party leader and military head in 1993, holding that office until 2003. Jiang raised the profile of the presidency considerably with frequent trips abroad, while hosting world leaders and international gatherings at home.

By the end of his time in office, a thin precedent had been set in which the top leader was expected to serve just two terms as party head — whose term is not limited — along with the maximum two as president. Jiang’s successor Hu Jintao inherited this tradition, handing over his party post to Xi in 2012 and the presidency in 2013.

XI ENHANCEs CHINA’S — AND HIS OWN — GLOBAL STATUS

China’s most powerful leader since Mao, Xi, 64, has used the presidency mainly to expand China’s presence on the global stage while casting himself as a major world leader. His foreign travels have included a high-profile appearance at the Davos gathering last year at which he sought to present himself as a champion of free trade. At home, however, Xi wields authority mainly as head of the party and the armed forces, while consolidating power by taking control of an unusually wide range of political, economic and other functions.

The strongest sign of Xi’s intentions emerged last year when he broke with tradition by not nominating an obvious successor at the party’s twice-a-decade national congress. He’s cast aside the past two decades of collective leadership, most notably by reducing the post of premier from custodian of the economy to mere executioner of his program.

By enabling Xi to retain the presidency beyond 2023, the party is sending a strong message that it will adhere to Xi’s vision of transforming China into fully fledged modern nation status by 2050 under the party’s firm guidance. That puts an end to any notion of democratic reform while signaling to the U.S. and others that China will not waver in its quest for regional dominance in a manner that profoundly challenges the post-World War II liberal Western political order.

Yet, it also undermines the party’s stated goals of institutionalizing power and strengthening the rule of law, experts say. “He is a dominant leader who has surrounded himself with loyal acolytes — and in a deeply Leninist political system not known for speaking truth to power,” said Evan Medeiros, a former top Asia adviser in the White House now with the Eurasia Group.

While he presently enjoys an absence of serious rivals, Xi’s future standing may well depend on how he handles China’s enormous government debt, social welfare reforms, slowing growth and challenges to its global rise to prominence.