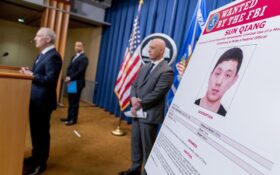 Five men accused of acting on behalf of the Chinese government have been charged with brazen and wide-ranging schemes to stalk and harass Chinese dissidents in the United States, including by seeking to derail the election bid of a little-known congressional candidate, the Justice Department said Wednesday.

The cases underscore what American officials describe as increasingly aggressive efforts by the Chinese government — sometimes involving the use of hired private investigators — to seek out, silence, and threaten pro-democracy activists abroad.

“Authoritarian states around the world feel emboldened to reach beyond their borders to intimidate or exact reprisals against individuals who dare to speak out against oppression and corruption,” Assistant Attorney General Matthew Olsen, the Justice Department’s top national security official, said at a news conference announcing three criminal cases.

“This activity is antithetical to fundamental American values,” he added. “We will not tolerate such repression here when it violates our laws.”

The criminal cases, filed in federal court in Brooklyn, allege longstanding efforts to dig up dirt on dissidents, intimidate them and stifle their speech. It’s not the first time the Justice Department has brought charges for similar conduct: in 2020, prosecutors charged eight people with working on behalf of the Chinese government in a pressure campaign aimed at coercing a New Jersey man who was wanted by Beijing into returning to China to face charges.

In one of the new cases, two New York men operating under the direction of an employee of a China-based international technology company spied on pro-democracy activists, sought to illegally obtain and disseminate the federal tax returns of a dissident and also plotted to destroy the artwork of a dissident artist, prosecutors said. A sculpture depicting Chinese President Xi Jinping as a coronavirus molecule was demolished last year, though no one has been charged in that vandalism, the Justice Department said.

Two of the three men in that case, Fan “Frank” Liu and Matthew Ziburis, were arrested Tuesday on charges that include conspiring to commit interstate harassment and criminal use of a means of identification. A lawyer for Liu argued at a court appearance that his client was not a flight risk, and he was released on a $1 million bond with electronic monitoring. Ziburis was released on a $500,000 bond.

A third man, Qiang “Jason” Sun, who prosecutors say tasked the others, remains at large.

In another plot that U.S. officials say was orchestrated by China’s Ministry of State Security, an author who once helped start a pro-democracy organization collected intelligence to be shared with the Chinese government about dissidents and activists, Uyghurs, Tibetans, and advocates for Taiwanese independence.

The man, Shujun Wang, 73, was arrested Wednesday and released later in the day on a $300,000 bond. A defense lawyer did not immediately return a message seeking comment.

A third scheme by a man alleged to be a Chinese government spy sought to undermine the candidacy of a congressional candidate by plotting to locate, or even manufacture, derogatory information that could prevent him from being elected.

The operative, identified as Qiming Lin, is accused of having contacted a private investigator seeking information about the candidate’s phone number, address, and vehicle. He later asked the investigator to “dig up things from 1989 to now” in search of flaws against the candidate to derail his candidacy.

At one point, according to charging documents, Lin told the private investigator that even “violence would be fine too” and suggested that the candidate could be beaten “until he cannot run for election.”

The investigator Lin is accused of contacting was actually a source for the FBI, who reported the initial outreach to the bureau and said he believed Lin to be a retired MSS agent. In an affidavit, an FBI agent conducting the investigation wrote that, “Based on the conduct summarized herein and my experience and training, I assess that LIN continued to act on behalf of the MSS even if ostensibly retired.”

The candidate is described in court papers as a Chinese dissident and student leader of the Tiananmen Square protests in 1989. Though the candidate is not identified by name in the complaint, the biographical details in the document match those of Yan Xiong, who last fall announced his candidacy as a Democrat for a congressional seat in this year’s election.

Lin, who faces charges that include conspiracy to commit interstate harassment, remains at large, officials said.

The top federal prosecutor in Brooklyn, Breon Peace, would not describe any conversations that officials may have had with Yan, but said that the Justice Department takes seriously its obligations to notify victims of potential threats. “When it comes to acts of violence,” he said, “our office and the FBI were not going to let that happen.”

Yan, who has lived in the U.S. for 30 years, said in an interview with The Associated Press that he did not know any details about the allegations and learned about them after reporters reached out to him Wednesday.

He said he had not witnessed any harassment or intimidation and had not been contacted by the FBI or Justice Department, and that he did not know why the Chinese government would be interested in his campaign for Congress.