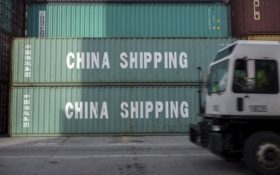 The increases are in response to the U.S. announcing it will impose tariffs on $200 billion worth of Chinese-made goods starting next week. The tariffs will start at 10 percent, then rise to 25 percent on Jan. 1.

There was no word on whether China would back out of trade talks it said it was invited to by the U.S., but a Chinese Commerce Ministry statement said the U.S. increase “brings new uncertainty to the consultations.”

The two countries have already imposed import taxes on $50 billion worth of each other’s goods. President Donald Trump threatened to add an additional $267 billion in Chinese imports to the target list if China retaliated for the latest U.S. taxes. That would raise the total affected by U.S. penalties to $517 billion, covering nearly everything China sells to the United States.

At the root of the trade war are U.S. complaints about China’s plans to try to overtake U.S. technological supremacy. Those plans include “Made in China 2025,” which calls for creating powerful Chinese entities to compete in robotics and other fields. The U.S. says the plans are based on stolen technology, violate China’s market-opening commitments and might erode American industrial leadership.

American companies and trading partners including the European Union and Japan have longstanding complaints about Chinese market barriers and industrial policy.

“China has had many opportunities to fully address our concerns,” Trump said in a statement. “I urge China’s leaders to take swift action to end their country’s unfair trade practices.”

The trade gap means China will run out of U.S. imports to tax while the U.S. still has plenty of Chinese imports to target. But Beijing has other ways to retaliate. American companies say regulators are already starting to disrupt their operations.

Last week, the American Chambers of Commerce in China and in Shanghai reported 52 percent of more than 430 companies that responded to a survey said they have faced slower customs clearance and increased inspections and bureaucratic procedures.

The U.S. taxes are targeting Chinese goods that Washington says have benefited from improper industrial policies. Beijing’s tariffs have hit soybeans and other farm goods from states that voted for Trump in 2016.

In the first two rounds of tariffs, the Trump administration took care to try to spare American consumers from the direct impact of the import taxes. The tariffs focused on industrial products, not on things Americans buy at the mall or via Amazon.

By expanding the list to $200 billion of Chinese products, Trump may spread the pain to ordinary households. The administration is targeting a bewildering variety of goods — from sockeye salmon to baseball gloves to bamboo mats — forcing U.S. companies to scramble for suppliers outside China, absorb the import taxes or pass along the cost to their customers.

The U.S. government did withdraw some items from its preliminary list of imports to be taxed, including child-safety products such as bicycle helmets. And in a victory for Apple Inc., the administration removed smart watches and some other consumer electronics products.