In China, Trump receives "best greeting ever." - The Horn News 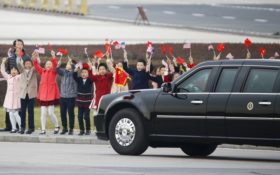 The ceremony accompanying Trump’s arrival Wednesday afternoon was elaborate even by China’s lavish standards. Heads of state are usually given a low-key reception at the airport, with the real pomp and circumstance reserved for his or her arrival at the Great Hall of the People in the center of Beijing.

The president and first lady appeared pleased, smiling and accepting flower bouquets, with Trump at one point throwing his arms open and appearing to exclaim, “Wow.”

As Trump’s motorcade pulled away, the tempo increased, with children jumping up and down while they waved and chanted.

Protocol is extremely important in Chinese governance and diplomacy, and such events are always carefully choreographed down to the smallest detail. Spontaneous interactions between visiting leaders and ordinary Chinese are rare, although visiting U.S. presidents have in the past been permitted to deliver speeches and meet with university students.

Welcoming ceremonies have grown increasingly elaborate under Chinese President Xi Jinping, who has lavished more time and energy on advancing China’s diplomatic agenda than any of his predecessors.

That’s included devoting hundreds of hours a year to welcoming ceremonies, meetings and receptions, in addition to hosting major multilateral events such as the Asia-Pacific Economic Cooperation leaders meeting and the G-20 summit.