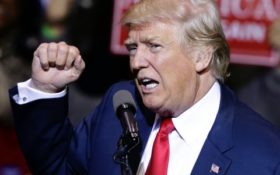 He’s getting madman Kim Jong Un under control — and he’s getting China to do the dirty work for him.

Tuesday, China has apparently bowed to increased pressure by the United States and has moved a stunning 150,000 troops to the border of North Korea as a message to Kim, according to The Daily Mail.

Additionally, the Chinese government just rejected a huge export of coal and shipped it back to North Korea without paying — a massive blow to the already struggling Korean economy, which is heavily dependent on their coal exports to the Chinese mainland.

North Korea is looking for trouble. If China decides to help, that would be great. If not, we will solve the problem without them! U.S.A.

The president made clear his hope that China will pressure its neighbor and close ally to stop its nuclear program — and it seems China has responded as hoped.

He has also repeatedly hammered China for exporting more goods to the U.S. than it imports; Trump made a new trade deal part of his offer to the Chinese leadership.

I explained to the President of China that a trade deal with the U.S. will be far better for them if they solve the North Korean problem!