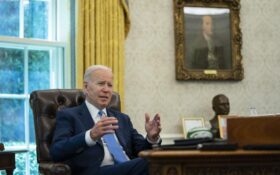 China on Wednesday criticized a U.S. law to encourage processor chip production in the United States and reduce reliance on Asian suppliers as a threat to trade and an attack on Chinese business.

The law signed this week by President Joe Biden promises $52 billion in grants and other aid to investors in U.S. chip factories.

It responds in part to warnings that supplies might be disrupted if China attacks Taiwan, which produces up to 90% of high-end chips. China’s ruling Communist Party claims the self-ruled island as part of its territory.

Parts of the law “restrict companies’ normal investment and economic and trade activities in China,” Wang said, without giving details.

Disruption in chip supplies following the coronavirus pandemic hampered production of goods from smartphones to autos and highlighted the world’s reliance on Taiwanese chips and Chinese factories that assemble most electronic devices.

Fears of disruption have been heightened by Chinese threats to attack Taiwan, which split with the mainland in 1949 after a civil war.