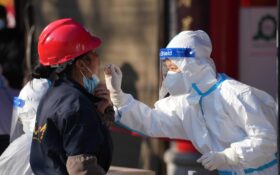 In a chilling crackdown, Communist China on Wednesday ordered as many as 13 million people locked insider their neighborhoods and workplaces in the northern city of Xi’an following a spike in coronavirus cases.

State media reported that city officials ordered all residents to stay home unless they had a pressing reason to go out and suspended all transport to and from the city apart from special cases. Leaked video seems to show video of Chinese soldiers welding gates and doors shut, and thousands of troops deployed on the streets.

The order was to take effect at midnight and last indefinitely.

2/n Here is another video footage on the ground. Anyone whose Digital Health Code has turned red will be refrained from entering their home district & will be captured. pic.twitter.com/bli1CaJOQM

In this leaked video, it showed how authority welded down the exiting gate of a village with no regard of safety code, leaving anyone trapped inside to the severe fire hazard. pic.twitter.com/ZjhS0z79T3

Only one person from each household will be permitted outside their home every two days to buy household necessities, the order said.

Xi’an on Wednesday reported 52 new locally transmitted cases of the coronavirus over the previous 24 hours.

Those measures have been stepped up in recent days ahead of the start of the Beijing Winter Olympic Games on Feb. 4.

The Xi’an restrictions are some of the harshest since China in 2020 imposed a strict lockdown on more than 11 million people in and around the central city of Wuhan after COVID-19 was first detected there in late 2019.