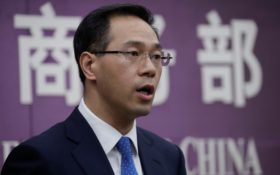 China’s government on Thursday denied President Xi Jinping’s promise of market-opening measures this week was aimed at settling a tariff dispute with Washington and said negotiations are impossible under “unilateral coercion” by the United States.

A commerce ministry spokesman, Gao Feng, complained U.S. President Donald Trump’s government has “shown no sincerity,” according to the official Xinhua News Agency. Gao said the two sides have yet to start negotiations.

Gao repeated complaints that Trump acted improperly when he responded to Beijing’s protest over his plan to raise tariffs on $50 billion of Chinese goods by saying he might add another $100 billion of imports to the list.

“Under unilateral coercion, it is impossible for the Chinese side to conduct any negotiations,” Gao was paraphrased as saying.

Trump’s proposed tariff hike was a response to complaints Beijing steals or pressures foreign companies to hand over technology. China has responded with its own $50 billion list of U.S. goods for retaliation if Washington goes ahead with the increase.

Gao denied Xi was making an overture to Washington when he announced plans in a speech Tuesday to cut import duties on autos, ease restrictions on foreign ownership in China’s auto industry and make other market-opening changes.

Share prices of global automakers rose on investor hopes their China operations, while some economists said the positive tone of Xi’s comments might provide a basis for talks with Washington.

“The measures to increase opening announced by China are a major decision to open to the outside and have nothing to do with Chinese-U.S. trade frictions,” Gao was paraphrased as saying.