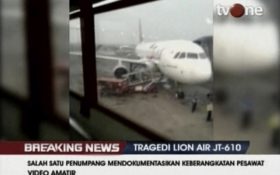 Like untold numbers of spontaneously shot smartphone videos, Paul Ferdinand Ayorbaba’s most recent was not a work of art, full of the backs of heads and the constant bobbing and disorientating pans and zooms that are a signature of mass digital culture.

But its mundane details have been transformed by tragedy into something deeply chilling — the last images of some of the 189 people who perished in terrifying circumstances little more than an hour after the video was shot.

Just minutes after takeoff, their Lion Air flight plunged into the Java Sea, tearing apart the plane and the people in it.

Ayorbaba traveled frequently within Indonesia on business and the boarding video was perhaps meant to comfort his wife, Inchy Ayorbaba, who felt a little anxious about the trip to an outlying island he’d never visited.

“It was his last contact with me, his last message to me,” she said in an interview with Indonesian TV at a police hospital where she’d taken their three children for DNA tests to help with victim identification.

The images in the short video are familiar not just to the millions who have passed through the Indonesian capital’s well-worn domestic terminal but to anyone who has taken a flight.

At the beginning, there’s a semi-orderly queue of people showing their boarding passes to a waiting attendant.

Suddenly it dives into an extreme close-up of the pass in Ayorbaba’s hand, showing his name and the flight number, JT-610.

Next, a jerky view of a bright wide concourse and the backs of people walking ahead, pulling their wheeled carry-on bags.

Then a sudden swerve into a narrower passage from where the tarmac and waiting planes are visible through slats.

Ayorbaba zooms to a waiting red and white Lion Air plane, pans to another Lion Air jet in the distance, and then back to the boarding stairs attached to his flight. A woman wearing a bright hijab reaches the stop of the stairs and disappears inside.

About 35 minutes before takeoff, Ayorbaba uploaded the video to his wife using the instant messaging app WhatsApp, a timestamp shows, she said.

She first saw the message when she woke up at 6:30 a.m. but didn’t take in the video’s details and went back to sleep. Within a minute of that moment, the plane began a rapid dive that ended in the sea northeast of Jakarta.

It was about 9 a.m. when Ayorbaba heard news of a Lion Air plane that crashed en route to Pangkal Pinang in the Bangka Belitung island chain.

“I went back to watching the video,” she said. “I saw his boarding pass he showed in the video. I started to believe he was in that crashed plane,” she said. “I kept calling him, sending WhatsApp messages, hoping that he didn’t go, or something made him cancel his trip but there was no answer.”