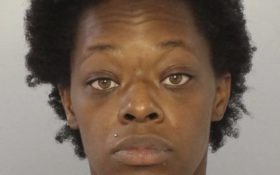 A toddler’s caregiver was charged with murder in the suffocation death of the baby whose body was found partially buried in a public park with the top of her head exposed, police said Thursday.

Police arrested Nyishia Corbitt, 33, for the death of 22-month-old Alina Barnes, who she’d been taking care of. They say surveillance footage near Corbitt’s apartment showed her leaving the building with the toddler — who police believe was already dead — in a child carrier and walking to the park across the street some time Oct. 9. She was seen in the footage returning to the apartment without the child.

“It’s a terrible tragedy. This shouldn’t happen to a child,” Philadelphia Police Captain Jack Ryan said during a news conference.

Corbitt was charged with murder, making false reports, tampering with evidence and abuse of a corpse among other charges. She led police to the park in the bustling neighborhood near a high school and La Salle University’s campus where the child’s body was discovered early Tuesday.

A message left with an attorney for Corbitt was not immediately returned Thursday. Court documents showed a motion by her attorney to set bail was denied.

Ryan said Corbitt, who has two children ages 4 and 5 with the toddler’s father and may have been his current girlfriend, had been watching the girl for several weeks. Ryan said Corbitt was living with one of her relative’s, not the child’s father.

The father was working as a Lyft and Uber driver at the time the toddler allegedly went missing. Ryan also said the child’s biological mother is currently in jail on retail theft charges.

Ryan said Corbitt called her own mother Monday and told her the toddler was gone.

“Her mother did the right thing and called police,” Ryan said. “She reported the child missing.”

A search began Tuesday, and Corbitt led officers to the park, where the girl’s body was found partially buried with the top of her head exposed.

The medical examiner’s office determined the toddler died from suffocation, but Ryan said he could not say whether there were any other signs of abuse. He said the state Department of Human Services was involved in the case, but said he could not provide details.

Ryan said Corbitt’s two children had been living with her mother.

He declined to discuss any statements Corbitt made to police during questioning, but called the woman “very distraught.” Ryan said Corbitt had seven other previous “contacts with police” but he could not say what she had previously been charged with. He said none of the charges were for violent crimes.