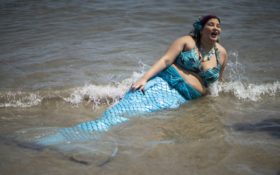 Saturday’s colorful spectacle of participants in zany aquatic costumes ushered in the New York summer for the 37th time.

This year, the corner of Mermaid Avenue and West 35th Street in Brooklyn is being named Woody Guthrie Way.

The songwriter famous for “This Land is Your Land” and his wife moved into a modest first-floor apartment on Mermaid Avenue in 1943, and that’s where the siblings grew up.

Arlo is famous singer-songwriter in his own right, most famous for “Alice’s Restaurant.”

The parade was founded in 1983 to promote the historic amusement park district and what Coney Island advocate Dick Zigun calls its “wacky art.”

The parade now has a global following and is staged each year on the Saturday closest to the summer solstice.